Come closer to your past

‘’Are you a history buff? Or a researcher? Or a history teacher?’’

My reply to the Gujarat Tourism manager handling bookings for one of the remotest resorts in the country was simple but expressions on his face suggested he was not convinced. Then why are you going to that place? Usually tourists do not go to such places.’’

I could sense his curiosity. Who goes to a place as far as Dhaulavira in the western-most edges of the country with their family and that too, on New Year? New Year celebrations translate to swanky resorts or foreign locales, and here I was headed to a Harappan site, just off the Rann of Kutch.  Bawra mann, as they say, can take you anywhere.

The geographical vastness of this country is also one of the factors that inspire you to stretch your imagination in any of the directions.  All one has to do is decide the destination, which in our case was far off in Gujarat, bordering Pakistan, and the mode of transport. Thankfully, most of the far-off towns are now connected with cities serviced by airlines. I had chosen Spice jet for the simple reason that I had been covering my earlier media assignments with the airlines and had a pretty smooth flying experience with their flights.  In our case, Ahmedabad was the nearest airport that was a just two-hour flight away from Delhi. Post the flight, the thought of driving on Gujarat’s highways was enough to make me dance. In fact, my travel had already begun in my mind even before I had reached my destination. That is the real charm of Indian tourism you can mix air and road travel with nature walk, hiking, climbing, trekking, heritage walks, culture, traditions, food trails, religion, history or even nothing.

On the highway to horizon in Gujarat

Narsibhoy was our driver cum guide from Ahmedabad for the next three days. I can never forget this master storyteller from Bhuj, who would charm us with many stories during our journey to the tent city spread out on the white sand of Dhordo village, the site of Gujarat Tourism’s Rann Festival. “The white dancing lights on the sand in pitch dark nights are our ancestors’ spirits visiting us to see how we are doing. They chase you when you walk and disappear if you turn around.” The mystery of the Rann was slowly unfolding and I could feel goosebumps in broad daylight on the highway to horizon.

After spending next two days in Dhordo and soaking ourselves in the cultural fiesta of Rann, we headed for our next destination, Dhaulavira, which is 300 kilometres away. Thoroughly excited at the prospect of hitting the highway once again, I was the first to jump into our car.

Driving for the next 5-6 hours, Narsibhoy was again donning the double role of a storyteller. His Kutchi ancestors, who had long left their motherland in search of greener pastures, were returning after Kutch has started receiving rains in last few years. How river Indus is again changing its course and is coming nearer, the earthquake of nineteenth century that forced the river to flow towards Pakistan leaving a vast Kutch dry… he had many stories sleeping beneath his colourful turban.

Gujarat Tourism’s small but clean and cosy resort, Toran, in Dhaulavira, was our home for the next couple of days. We spent our days exploring the Harappan sites while munching on Toran’s delicious selection of Gujarati snacks and in the night, we were left awestruck by the pile of stars reflecting in the pitch black sky. The peace of the land, away from the New Year’s Eve revellers, was just the most perfect way to ring in the new year.

By the time we reached Ahmedabad for our return flight, we had covered more than 1100 kilometres and had not encountered a single pothole. Commendable, if we go by the Indian roads’ standards. This was my first experience of Gujarat, and the colourful state had already planted enough good memories to lure us back soon.

6 thoughts on “The White Rann and my nomadic quest” 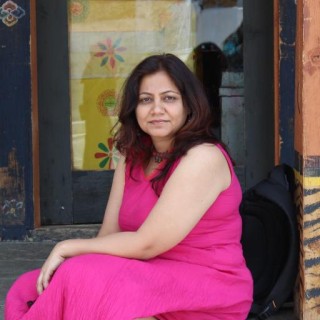